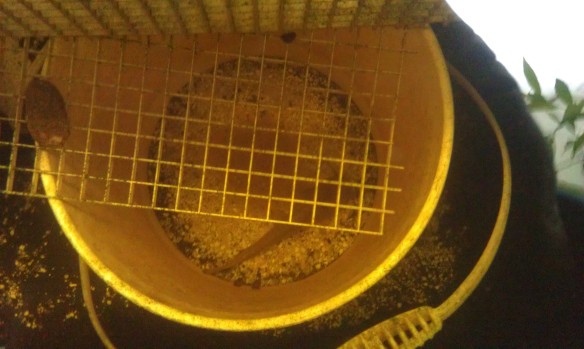 Our motivation for trying this fish species came after learning the most likely candidate food fish to spawn in a closed aquatic system that is temperate (80 degrees summer / 40 degrees winter), is the yellow bullhead catfish (Ameiurus natalis), courtesy of the New Alchemy Institute:

“Tests were carried out using both tilapia and yellow bullhead catfish in the hydroponic solar pond system. Catfish can tolerate much lower temperatures than tilapia, and, young catfish can be obtained more easily than young tilapia.”
Male bullhead catfish protect the egg mass after spawning (fish and egg mass with bucket nest in picture above), so it is very possible that a week from now we will be observing our first baby catfish!
Our plan will be to install a small diameter wire cage in the tank downstream of the catfish tank. That way when the baby fish are active at night, coming to the surface to feed, they will flow through the pipe downstream, collecting themselves without us having to disrupt the nest and stress the fish.
Another thing to mention is that I wonder what it was exactly that encouraged the fish to spawn… besides spring being this species natural time to spawn, I am considering the fact that comet goldfish (Carassius carassius x wakin) spawn in the same tank, and they have spawned continuously for the last month (could it be the goldfish spawning hormones that gave the green light?).
We’ll see how this new fish adventure unfolds and we’ll let you know how it goes!