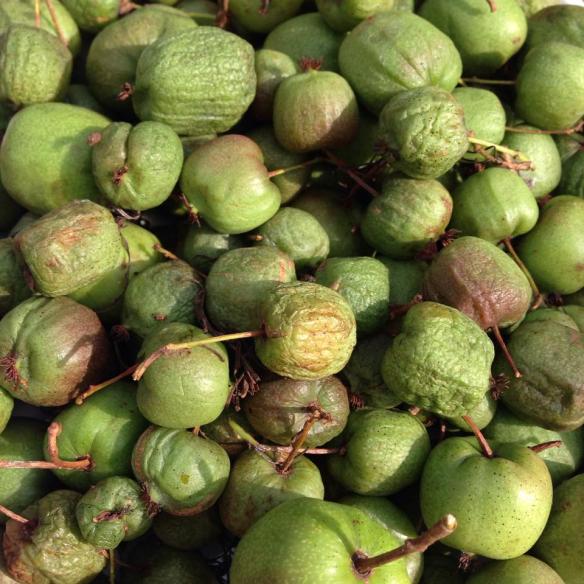 The Massachusetts Invasive Plant Advisory Group (MIPAG) has voted to designate a locally-produced species of kiwifruit (Actinidia arguta; a.k.a. the kiwiberry) as “likely invasive” in the state and has petitioned to have it added to the Mass. Department of Agricultural Resources (MADR) statewide prohibited plant list – on questionable grounds, according to Dr. Iago Hale, assistant professor of specialty crop improvement at the University of New Hampshire. Such an unprecedented listing of a commercialized fruit crop will, says Hale, prohibit Massachusetts farmers from growing kiwiberries, a low-input perennial specialty crop with a profit value exceeding $20,000/acre; and will deny Massachusetts residents the ability to buy kiwiberries from their grocery stores and farmers’ markets, even if the berries are produced out of state. Much of the evidence provided by MIPAG in this case is anecdotal or speculative, says Hale, adding that in many instances the claims are false.

Before the January 10 deadline (5 PM), please email Taryn LaScola (Taryn.LaScola@state.ma.us) and request that MDAR not include the kiwiberry on its list of prohibited plants. Or, even better, show up in Westborough to give oral testimony in person: link for Call to action letter, and more details about giving oral testimony: http://www.unh.edu/halelab/kiwiberry/MIPAG_Call_to_Action_Jan1.pdf

REASONS WHY THIS REGULATION IS INCORRECT

1) Genetic testing to determine whether individually dispersed naturalized growth of hardy kiwi is speculative, due to the fact that many of these vines were likely planted over 100 years ago and at that time all vines planted as ornamentals where seedlings, thus they cannot be tracked back to known varieties, thus they are incorrectly assumed to be wildlife dispersed seedlings and labelled “invasive”.

2) If this legislation was in place 200 years ago, apples would have been banned, and the entire New England apple and cider industry would be illegal. Apply apple to the “Massachusetts Criteria for Evaluating Non-Native Plant Species for Invasiveness” and you’ll see what I mean: http://www.mass.gov/eea/docs/dfg/nhesp/land-protection-and-management/invasive-plant-list.pdf

3) Invasive Biology is a Pseudo Science. Get the book here

4) People will grow and eat hardy kiwi despite the passing of this legislation.

5) The time, effort and resources spent on disparaging this plant, and the people growing it, is wasting all of our time. Global Climate Chaos won’t wait for confused people to wake up and realize their ignorance.

6) If hardy kiwi would have been growing during the Great Depression, millions of people in cold temperate climates would have had access to an easy to grow, delicious fall fruit easily stored and preserved, filled with life giving nutrients including more vitamin C then oranges. Don’t kid yourself that socio-economic food scarcity is a thing of the past.

7) Most of the Northeastern temperate climate forest biome is a patchwork of human created novel ecosystems. Actinidia arguta has already been established in this patchwork.

8) If hardy kiwi is banned in Massachusetts there is a reasonable probability that all New England States will also restrict the cultivation and sale of this fruit.

9) As of 2017 Stephen Breyer at Tripple Brook Farm has a 30 year old kiwi vine that is at the top of a 100 year old maple tree. A wild concord grape is smothering the kiwi vine and killing it. Grape vines are sooooo invasive 😉

10) Based on geologic fossil evidence, Actinidia were once native to North America and likely were present on various parts of the continent for nearly 80 million years (Late Cretaceous into the Tertiary Period).  Fossilized Actinidia seeds have been identified in north-central Oregon (Dillhoff et al., 2009) and in Arctic Canada (Matthews and Ovenden, 1990), where the vines grew in a forest composed of pines, spruce, redwood, and tamarack, at a paleolatitude of 74 degrees (well north of the Arctic Circle).  Changes in climate and repeated glaciations during the Late Miocene, Pliocene, and Pleistocene eliminated Actinidia and many other plants from North America.

DON’T LET OUR EYES BE DECEIVED BY HISTORY (pictures of the most cited “invasive” hardy kiwi vine, the vine that started it all): 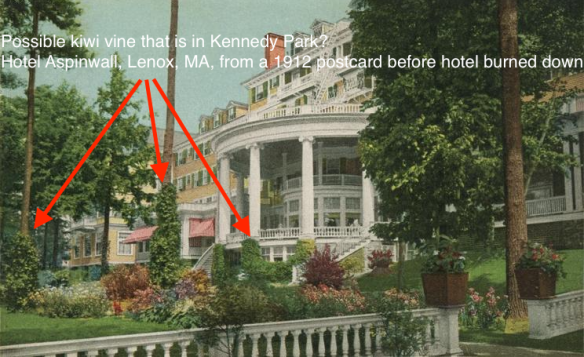 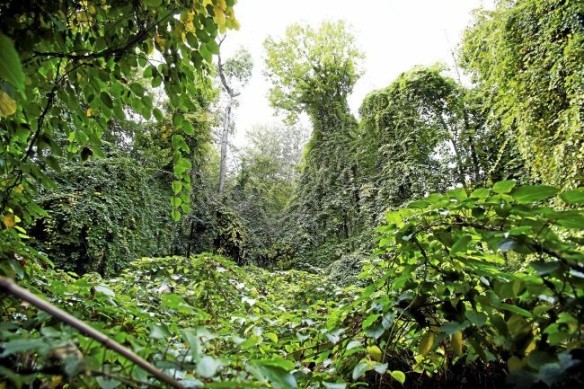 6 thoughts on “Call to Action: hardy kiwi may be illegal to grow in New England”